Tracy Sarkcess, wife of Ghanaian rapper Sarkodie has replied reports which went viral on the internet that she has hit the gym purposely to look sexy for the King Sark.

In a sharp response  to Eugene of Nkonkonsa media, the mother of two who has now developed a special love for gym, made it clear that such assertions should be ignored.

Check out the screenshot below to know more… 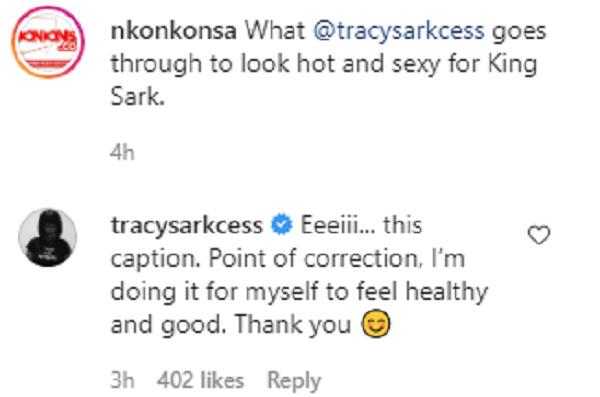 However, it was been alleged by socail media users that Tracy’s exercise was marked by the “OBOLO” comments she suffered from a writer at Yen Ghana two weeks ago.

As a kid, I always wanted to say daddy but it never happened—Yvonne Nelson

Stonebwoy’s “Anloga Junction” wins Album Of The Year At Reggaeville